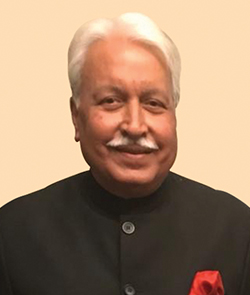 Ghanshyam has had an outstanding career in domestic, international banking and Capital Markets for over 45 years, during which he developed a firm understanding of the complexities of global markets. He is thoroughly familiar with the regulatory and business environment in USA, European Union, South East Asia, Middle East, India and other major money-center locations. While working for various organisations in the region, he has been able to establish close and mutually cooperative relationship with most Banking and non-Banking Financial Institutions, Stock Exchanges, Corporates, Regulators and Government Departments.

Over the last two decades, Ghanshyam has been a significant voice in promoting India and Indian corporates in many countries worldwide. He has travelled extensively across all continents and has been a speaker and participated in panel discussions and conferences (including World Economic Forum) in Australia, China, HongKong, India, Singapore, South Korea, Vietnam, Thailand, Malaysia and several countries in the Middle East, among others. He is also regularly invited to speak, lead and participate at various seminars and panel discussions. Ghanshyam has been a strong advocate of sound corporate governance and high standards of transparency to the corporate sector in the region.

In his early career, he spent over nine years with US Educational Foundation in India (as Research Assistant to a Senior Fullbright Scholar), Bank of India, Wells Fargo Bank N. A., (as Assistant Representative for India) and Marine Midland Bank, N.A, (before being seconded to Hongkong and Shanghai Banking Corporation, India in January 1986).

BACK TO TEAM PAGE